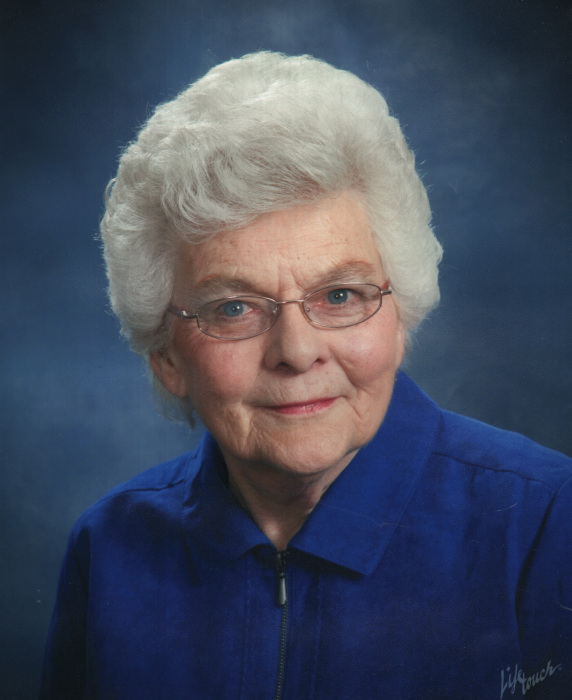 Bernita J. Darveaux died at the age of 88 on Monday, November 1, 2021, appropriately, All Saints Day. She was born in Pelican Rapids, MN, on October 14, 1933, daughter of Agatha (Bertha) Bertine (Erickson) and Edwin A. Toftely. She attended school in Pelican Rapids, graduating as class salutatorian in 1951.

Bernita met her music-loving high school sweetheart, Wesley Gordon Torgerson of Dalton, MN, in the music store she worked at in Fergus Falls. On May 11, 1952, they married in Pelican Rapids. Together they had four children—Bruce, Joni, Jill, and Eric—and lived in several county seats, including Fergus Falls, Wheaton, Morris, and Sauk Centre, due to Wes’s work with the Soil Conservation Service. They served the communities in which they lived, most notably through the Jaycees and the church, holding several offices and leadership positions. Wes died of scleroderma in 1970, so Bernita raised the kids on her own for the next seven years, taking a job at the Sauk Centre School District.

On October 22, 1977, Bernita married Gerald (Jerry) Darveaux of Alexandria and moved to beautiful Lake Le Homme Dieu, offering a view she cherished for the next 39 years. She loved walking on the road with Jerry or her good friend Alice Giefer and entertaining hundreds of family and friends over the years. No one left “the lake” hungry or not having had a wonderful time. Bernita was an excellent cook, making the long hours she spent cooking and baking for large groups of hungry visitors look easy. We also marveled at how she made one large family out of the two families that came together through this marriage, loving her four children and Jerry’s six, as well as all their families, equally.

During her years in Alexandria, Bernita was a faithful member of First Lutheran Church in Alexandria, participating in Bible study groups, singing in the choir for over 30 years, and serving as co-chair of the district for many years. She considered her most significant achievement being actively involved in starting the Central Lakes Concert Association, for which she served as membership co-chair for 30 years. She and Jerry enjoyed the concerts, rarely missing one. Despite all the ways in which she served others over the decades, she never felt she did enough; her humility was just one of the qualities that made her so loved by all who knew her.

Jerry passed away in April of 2012, and Bernita moved to Arabella Manor four years later, living there until her death. She appreciated the kind, friendly people and the many activities Arabella offered.

She is survived by her children, Bruce (Karen), Joni, Jill (Brad) Jenson, and Eric (Sue) Torgerson; Jerry’s children, Lana (Rick) DiGangi, Jan (Bonnie), Rene (Chris, deceased), Dion (Brenda), Alicia, and Blaise (Bettina); 22 grandchildren, 24 great grandchildren, and many nieces, nephews, and friends. She was greatly loved by all who knew her and will be dearly missed.

A live stream and recording of the service will be available 11:00 AM on Monday, November 15, 2021, on the funeral home website.

To order memorial trees or send flowers to the family in memory of Bernita Darveaux, please visit our flower store.
Open