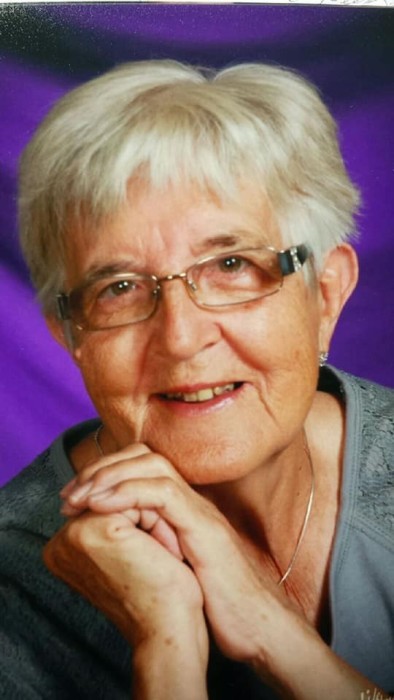 Bernadine Alice (Klimek) Busch was born December 24, 1932, to John and Anna (Loeffler) Klimek in Leaf Mountain Township in Otter Tail County.  She was baptized and confirmed at Our Lady of Seven Dolors Catholic Church in Millerville. She graduated from Brandon High School.

Bernadine was united in marriage to Donald Busch on July 6, 1955, in Alexandria, MN. Bernadine and Donald lived in Kenosha, Wisconsin from 1955 – 1958 and came back to Minnesota to raise their family on their farm in Leaf Valley, MN.  Bernadine worked different jobs including waitressing, cleaning, sales consulting for Alex Carpet One, along with working on the family farm.  Bernadine enjoyed gardening, cooking, baking, playing cards, and was an active fisherman.  Bernadine was a lifelong member of Our Lady of Seven Dolors Catholic Church and after retirement was able to spend time with church friends and volunteering.  She also loved spending time with her family and going on many different adventures with them.

A Mass of Christian Burial will be held 11:00 AM on Friday, December 6, 2019, at Our Lady Of Seven Dolors Catholic Church in Millerville with Reverend Peter Vander Weyst officiating.  Visitation will be held from 4-6 PM with Parish Prayers at 6 PM on Thursday, December 5, 2019, at the Anderson Funeral Home and for one hour prior to the service at the church on Friday.

To order memorial trees or send flowers to the family in memory of Bernadine Busch, please visit our flower store.
Open

Our Lady of Seven Dolors Cemetery